Tech Explained: Layman’s Guide to Behind The Scenes of Mobile Apps - Originally US 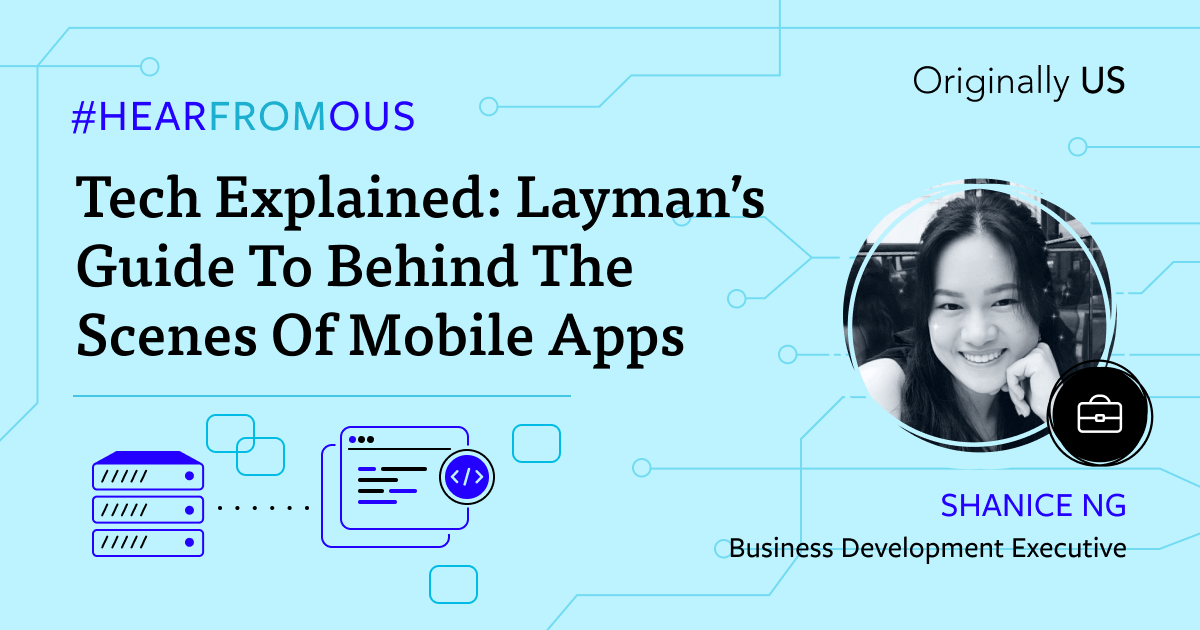 We interact with mobile applications daily. However, not many of us know what it actually takes to develop a mobile app. As someone who was not familiar with tech, I used to have many visualisations of how a mobile app is built:

Firstly, I thought the process was very complicated and messy. I used to think that developing a mobile app required lines after lines of code and so many different machines that it resulted in a giant pile of code that was incomprehensible, much like the vibes from the movie The Matrix — bizarre, out-of-this-world and hard to achieve.

Thankfully, my perception of coding and development became slightly more accurate when I was introduced to Python in my third term of university. My perception now was that it was something humanly possible, but that the codes had to be really really long, to produce a multi-functional, beautiful contraption that is the mobile app.

Last but not least, I also used to think that anything the developers wanted to change had to be either changed by code or through the mobile app itself and that everything was coded on a single platform. Basically, I had no idea that backend development existed.

Now, I imagine that you stumbled upon this blog article for one of the possible reasons listed below:

Well, you’ve come to the right place. As a “tech newbie” who recently got introduced to the mobile app development industry, allow me to attempt to break down these complicated, technical architecture into simple, understandable layman terms.

(Don’t worry — My boss with 20 years of coding experience has proofread this, so all the technical explanations in this article are accurate!)

Well, it may come as a surprise to many, that all my preconceived notions about mobile app development were wrong.

Firstly, not every single component of the app is done on a single platform. There are a few different components to be coded, for example, the mobile app interface, the application programming interface and the server (more about this later).

My second misconception was that mobile app codes were irrefutably long. While this is partially true, due to the multiple features that have to be coded in a mobile app, versus code that only has to do a single function, the length and efficiency of the code actually heavily depends on the expertise and experience of the developer, rather than something that is set in stone.

Lastly, despite the multiple integrations and codes needed, a good mobile app development vendor will be able to organise all these assets well and in an efficient manner.

Now that we have debunked all my preconceived notions, let’s dive right into the inner workings of mobile apps!

What is Frontend Development?

Frontend development is essentially coding what users interact with. Everything you can see on your phone screen is coded by a frontend developer. For example, your user interface, your buttons, your drop-down menus, frontend developers are the ones responsible for coding them into the mobile app.

Think of them as Santa Claus — The ones that are on the front lines, ensuring that each present is sent correctly to each house.

Frontend development also requires quite a fair bit of user journey mapping, because these developers need to determine how to code the buttons, exactly which button leads to which page etc.

What is Backend Development?

If you liken frontend development to Santa Claus, then backend developers are like the elves working behind the scenes, packing each present, and ensuring that everything is in order for Santa Claus to even have presents to give in the first place.

Backend development is essentially the part of the mobile app that you as a user cannot see or interact with. It’s what ensures that the mobile app works, consisting of: server, security, logic.

Well, you may ask. Why is the backend necessary? This is because mobile apps always require data storage, and we need the backend to store this data.

Aside: Want to know how much it costs to develop a mobile app? Check out this post!

There are apps that have very little data and thus do not require a backend system, but these apps are very rare nowadays as there are many limitations in terms of what you can do with the app.

Now that you’ve understood better (hopefully) what frontend and backend development entail, you might still feel there’s a missing link: how do you make these two work together?

What is the API? According to Oxford Languages, API is a set of functions and procedures allowing the creation of applications that access the features or data of an operating system, application, or other service.

In layman terms, it is the code that tells the mobile app what data to retrieve.

Now that you have your frontend mobile app, and the backend database and servers in place, you now need something that can link the two up and establish communication between them. This is where the API comes in.

Here’s an analogy that might make things clearer: Think about the scenario in a typical restaurant. You have the menu, the waiter and the kitchen.

The menu is like your frontend mobile app, where customers can browse and choose the food they want.

The kitchen is like your backend database and servers, where the customers’ orders are prepared (or in this case, retrieved).

The missing link is the waiter, who helps to communicate your order to the kitchen, and also brings your food from the kitchen to you. That is essentially the API’s job.

Difference between API and Server.

At this point, you must be wondering, I have heard of something called the “server” before. If API is the code helping me to retrieve the data I want, then what is a server? Even better, what does a server look like?

Firstly, we must recognise that there exists physical servers and cloud servers, and within physical servers, you can break down the types of servers in even more detail. But to prevent this article from overwhelming you (and myself, to be honest), let’s just keep it at physical servers for now.

Cloud servers, well, exist on the cloud. So I guess they look something like this:

To understand the role of a server better, we look at the reason why it is called a server in the first place. You can think of it simply as the reason that it has the primary job to serve the information files or images that you as a user want from the applications.

If API is the middleman that tells the system what data to retrieve, servers are the ones that store the data and give the API the data. You could think of them as the chefs who pass the food to the waiters.

What is Full-Stack Development?

There are people, coders/developers, who know how to code for both the frontend and backend development. This is what we call a full-stack developer. These people are rare because it takes time and skill to master just one aspect of development.

Our CTO, Torin Nguyen, is a prime example of a full-stack developer who is familiar with over 10 different frontend and backend programming languages.

Likewise, a mobile app development company/vendor that offers both frontend and backend development offers full-stack development. Additionally, there are mobile app company/vendor with in-house design, usability study and business analysis capabilities who can further value-add to you. We (Originally US) is a good example of such a company.

With that, I hope this article helped you understand more about what it takes to make a mobile application work!

If you’re interested to understand even more about the behind the scenes of mobile apps, you can check out our post about the design aspect here.

If you’re looking for good ios app developer to build your app, let us discuss how we can help you! Chat with us on Whatsapp today.

Why did we artificially kept our team small?

Factors That Can Significantly Affect Your Project Timeline